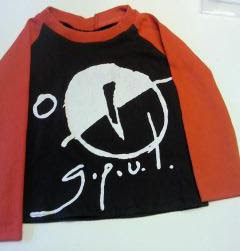 Some time ago I found a problem with one of my desktops when remapping the acpi power button events to hibernate instead of power off the machine, the machine was sending two events on each button press which sadly meant that Linux would hibernate again when powering the machine on :-(
The solution I had to apply to this was to protect my hibernate acpi support script with a lock that avoids the double pm-hibernate call. This ended up being like something like this:
Anyway, while I was waiting for the ACPI guys not to answer me I was exploring some things which are the ones I wanted to write down here.

First: The good old typical linux low level mapping with setkeycodes, in this case if you want to map scroll lock (0x46) to the sleep key (142) you'll do You can use to see the scancodes and look for key codes at /usr/include/linux/input.h and /usr/share/acpi-support/key-constants

Second: If you happen to have around a webcam with a button you can try to do something with it, if you are lucky enough that button may be mapped to the "XF86WebCam" key, this happened to me on a Logitech Quickcam 5500 (046d:09a1). It is easy on icewm to map this key writing on .icewm/keys something like this that execs your favourite command: As usual the typical tools like xev, configs like ~/.Xmodmap and infos like /usr/share/X11/XKeysymDB apply here.
There is something you must be aware of, the webcam button may not work if the camera device is not opened, in this case you can launch on background on your startup sequence a little perl script like this one which sleeps forever once it opens the video device:
Third: There are some programs like esekeyd and triggerhappy that can map your events (like the ones from the webcam) to keys and things like that, esekeyd has some limitations I comment here and triggerhappy is supposed to be a bit more powerfull, but I don't know if triggerhappy can work without the perl script I commented earlier, esekeyd right now can't. The config for esekeyd on my machine was to set on /etc/defaults/esekeyd this: and then I used acpi_fakekey from the acpi-fakekey package to fake the sleep key (142, see first comment on where to get the codes) when the camera button is pressed by setting on esekeyd.conf this:
Fourth: Userspace typically can't just signal hibernate but there I discovered the upower package that allows you to signal hibernate from userspace using a dbus signal and works great, with that my second example ended up with this sh oneliner (that locks my desktop and then sends the hibernate event wich acpi processes) on .icewm/keys:
Publicado por Santiago García Mantiñán en 19:57 No hay comentarios:

I have been managing a PIV based IBM server with an IBM ServeRaid 4Lx scsi controller, using Debian (currently squeeze) which supports it without any problem, but without having raid monitoring all this time (no tool on Debian for this). There is nothing I hate more about raids than not having monitoring of its status, so today I managed to get some time to start searching around about how to monitor this beast.

I ended up downloading the IBM CD for the card from ftp://download2.boulder.ibm.com/ecc/sar/CMA/XSA/ibm_fw_srsupp_7_12_14_anyos_32-64.iso to see if I could find the soft there and there it was, as easy as mounting the iso and copying ipssend from the linux/scsi/cmdline/ directory to my /usr/local/sbin and then running it.

Now I can feel much more confortable about this machine, not as much as I would feel as if it was running softraid with mdadm's monitoring, but enough for now.
Publicado por Santiago García Mantiñán en 22:58 No hay comentarios:

I was going to write this in spanish as Ya.com (Deustche Telecom spanish ISP) sold a lot of these devices around here, but it has always frustrated me a bit that almost all the info one finds about this device is found in German, so I'll write it in english (if anybody wants to ask something in spanish I'll answer trying to clarify it).

Anyway... this used to be a really valuable phone I have three and each costed me 20€, the phone was sold unlocked and it has SIP capabilities, so the uses can be quite a lot, besides, the hardware seems to be hard to break, unless you think it is really broken and start to botch inside with the help of your 1 year old son, which is what I did when I thought one of them was badly broken as it didn't keep any settings when it was turned off.

So, I'll try to write here all I know about flashing this devices, mostly cause I tend to forgive what I learn, but for others to learn as well.

There are several ways to flash this device:

I've said that only one of the methods has never failed to me, the others have failed a lot of times, not on flashing but when it downloads the firmware, to the phone before flashing it. You can find a lot of people with errors when downloading the firmware, most of them saying that memory is full or that there are not enough resources on the phone for this. I have developped a theory on this and a way to workaround these errors that seems to work ok whether you are flashing from the net or if you are flashing via USB. I believe that the problem is that the phone enters some kind of power saving mode and this causes the download to fail, so if you are pressing a key (for example, then hangup key) in order to avoid the screen to go black, the phone won't enter that mode and thus the download will finish ok, as easy as that. I have never read this tip anywhere, which seems quite weird to me as it was quite easy for me to find this out, don't know if the logic behind it is correct or not, but it works.

That said, I'd like to get deeper on this on the next part of this entry, so if you have enough just stop reading and if not... there we go.

There are a couple of programs that will allow you to change a firmware to include your stuff there or change defaults to those you want, they are tc300ex and mobilecustomizer (a front end for tc300ex), you can read about how to use them here.

I'll add my own notes about changing the firmware images, as I tried to find info on this and had to guess it all by myself:

On data_service.ini I used this settings:

To set the wallpaper to the sun image, set the startpage on wap browser to google for mobile and, more important, to set the wap to work over wifi and not gprs.

On wifi_voip.ini I had to fight a bit to guess this:

Which are the normal settings for wpa2 (aes) the important thing here is the tkipkeyformat and the aeskeyformat which if set to 1 means that it will be given in ascii (using the values I stated above). I know those values are for aes, and don't know about tkip, even tough people on the forums recommend tkip over aes, I still use aes, tkip is supposed to be substracting 1 from the value of either authtype or encrypttype (I'd bet for this one, but maybe it is both).

By default all the wifi profiles are active, I tried to set it so that only one was active, but there were problems, so better leave it like that and change it by hand if we just want one.

Downloading a firmware over the wifi is really slow, around 3 or 4 Kb/s on my tests, so it takes longer than doing it over usb, but you don't need the damm windows around, you don't even need a computer if somebody sets things up on a server for you, so I'm going to comment on how to do it.

You need a web server serving the file T60N925.00_FOX-general.cfg with something like this on it:

Of course you can point to whatever firmware image you want, even the one you have just set up with the tools I commented before.

The phone must be plugged and you must enter engineering mode (typing ###800#) and then on the setting meny go to provision and set the server-address to the address/name of your web server, then go to settings and choose to update once, exit to the main screen and wait for a while for the phone to ask you to download, while downloading you'll see an arrow moving down (remember to not allow to enter energy saving by pressing the hangup key while the arrow shows downloading), when it finishes the arrow points to the small phone. After that you have to enter again the provision menu and select to upgrade now.

I guess that's all at least all the important things are there and pointers to where to find more info, beware that most of it is on german, so good luck with that, but I hope the info I have written here will be enough for almost anybody.
Publicado por Santiago García Mantiñán en 12:44 No hay comentarios:

For those of you who don't know virtualbox, it is a free(libre) virtualization software which can run virtual machines on windows, linux, Mac OS/X, ... you can learn about it or even download it on its home page. I typically use it when I'm forced to run Windows and I usually do it locally but today I had to explore its remote side, accessing to it via remote desktop, this are simply a couple of notes I took.

Start, headless, poweroff or save the virtual machine:

Connect through ssh to the server exporting the rdp port and then connect to the remote desktop:

If you try to access a DFS resource using cifs you may bet this error:

I used to think that DFS access was still not mature enough until today, when I googled for this error and found that if I installed keyutils this error would disapear and everything would work ok. I thought this would not apply to me but it looks that it did.

So, this may apply to you as well if you are running a recent enough Debian and/or kernel, I'm currently running Squeeze with it's 2.6.32 kernel.

If it doesn't: check for CONFIG_KEYS=y and CONFIG_CIFS_DFS_UPCALL=y on your kernel config and for recent cifs-utils and keyutils packages (squeeze version works ok)